Kate is a senior majoring in Early Childhood Education. She started ballroom dancing in the Fall of 2016 and is currently competing at the Silver level. Before starting ballroom, Kate danced jazz, tap and ballet and was a competitive gymnast. Her favorite dances are cha-cha and foxtrot. When she isn't dancing, you can find her coaching at Anchor Gymnastics, singing in the Nazarian Center, or playing Jeopardy! in her dorm.
​

Emily is a sophomore studying Psychology and minoring in Neuroscience. She's always wanted to dance and has now been dancing for two years, and competes at the Bronze level. She mostly enjoys dancing East-Coast Swing, Cha-Cha and International Rumba. Whenever Emily isn't dancing you can find her in the ballroom office, watching the T.V. show Friends or playing tennis. 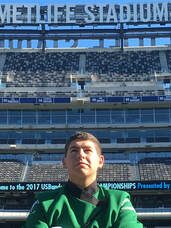 Thomas is a sophomore studying music education and a minor in Italian. He competes at bronze level and is now going into his second year of ballroom dancing.  His favorite dances include Foxtrot, Waltz, and International Rumba but he doesn’t dislike any dances whatsoever! When Thomas isn’t dancing, he’s either practicing piano and or singing, at a meeting for another club, or lounging around on his phone.